Chamomile tea is a favorite in my household.

It tastes great, its soothing and does a great job at winding everyone down for a restful night sleep.

In fact, I drink a hot cup of chamomile tea nightly, and I can literally feel the tension leave my body as I enjoy my steamy cup.

But what about chamomile tea and breastfeeding?

Is it safe? And can your baby benefit from all the herbal goodness as well?

These are all great questions every nursing mama needs to ask about nearly everything we consume. (Or at least it feels that way.)

And we’ll answer them. But first, let’s touch down on some herbal tea and breastfeeding basics.

Before using any herbal teas while breastfeeding, keep these tips in mind.

Limit Caffeine: Make sure your teas are caffeine free. Some caffeine is okay when your nursing, but keep it to just one or two cups if the tea of your choice does contain caffeine. This can affect your baby directly, and do you really want a caffeine wired baby…..

Make sure it’s breastfeeding friendly: Every herb in your tea must be nursing friendly. Always double check! If you’re drinking an herbal mix tea, check each individual ingredient. Lots of chamomile teas also contain other herbs, which may not be compatible with breastfeeding. The two things too make sure are:

Use organic teas: Eating organic everything isn’t usually possible, I totally get that. But when it comes to herbal teas, I strongly suggest organic. This is because some herb farms use A LOT of pesticides. And then the herbs are dried and packaged. There’s no way to even try to rinse off the pesticides or wash the leaves.

Basically, non-organic tea = pesticide tea. And this can have big effects on your baby. If cost is an issue, go for bulk teas. It’s so much less expensive, that it’ll offset the price almost completely.

When in doubt: Check with your pediatrician.

Is Chamomile Tea Safe While Breastfeeding?

Since the chamomile does enter the breast milk after mom drinks a cup, it’s a legitimate concern.

Generally, drinking chamomile tea while breastfeeding is considered safe. There isn’t a lot of studies done on the herb and infant safety, or at least I had a hard time finding them.

There have been studies to show it’s effectiveness in helping tame colic in babies, which I’ll go into more below.

So, while I cannot tell you definitively whether or not chamomile tea is safe for breastfeeding mothers, when used in normal doses (a few cups a day) it’s seen as normal food and drink type item, and considered safe.

Most doctors will give moms the green light on using chamomile while breastfeeding. But when in doubt, check with your pediatrician or a lactation consultant.

Historically, it’s been used by herbalists and mothers to soothe sleeplessness and tummy troubles for centuries.

I personally used chamomile quite frequently throughout both my pregnancy’s and into my nursing years. My toddlers get it routinely in their sippy cups too. 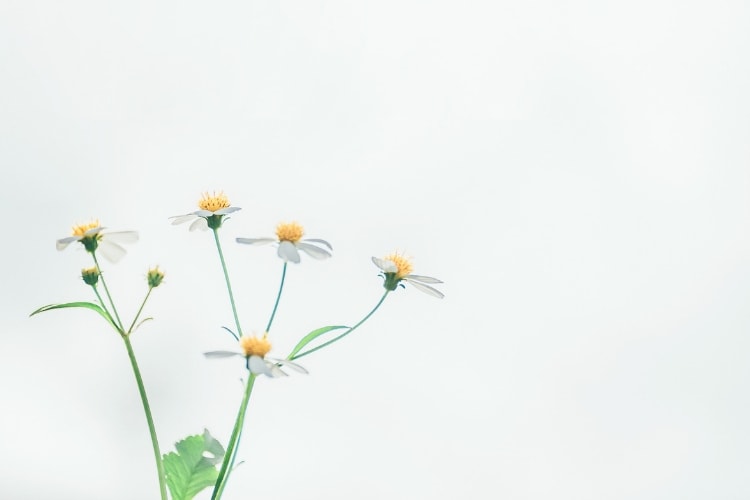 As a self-proclaimed herb nerd, I love all sorts of herbal teas. But chamomile holds a special place in my heart and is probably my favorite herb tea of them all. It’s a nervine, meaning that it’s healing properties tend to affect the nervous system.

So the benefits above are the typical reasons why so many people love their chamomile tea. However, how does this translate over for nursing mothers? Let’s look at how these benefits can help you.

1. Great for Calming Nerves Before Bed

Since what you eat and drink gets passed through your breastmilk, your baby will receive some of these added benefits as well. So better sleep for both of you.

Chamomile is great at soothing the stomach. This is why we drink it so often after dinner. It helps everyone digest their food better and prevent tummy aches.

Again, the idea is that you drink the tea, and the benefits pass to your baby. This study shows that chamomile is a great way to help soothe colic in babies. Although this study used

3. Could Help a Cold

According to this literature review from the National Institue of Health,

Common cold (acute viral nasopharyngitis) is the most common human disease. It is a mild viral infectious disease of the upper respiratory system. Typically common cold is not life-threatening, although its complications (such as pneumonia) can lead to death, if not properly treated. Studies indicate that inhaling steam with chamomile extract has been helpful in common cold symptoms; however, further research is needed to confirm these findings.

At the very least, it’s worth a try!

One report published by the American Association of Pediatrics indicating that chamomile could ease baby’s colic.

2 trials were conducted to test if chamomile was an effective remedy for colic in babies. 68 babies who were struggling with colic where give either herbal tea that contained chamomile, along with a few other herbs, or a placebo tea.

Each baby was given the “treatment” with each bout of colic up to 3 times a day.

After 1 week, parents reported that the tea stopped the colic in 57% of infants, where the placebo was only helpful in 26% of babies.

This could mean that chamomile could tame colic in babies. However, it’s hard to tell as the tea also contained fennel and other herbs known to help ease babies tummies.

Also, I’ll point out that the babies were given the tea directly from a bottle, and not through breastmilk.

Another popular question about chamomile is its direct effect on breast milk supply.

According to Dr. Sears Chamomile is considered a galactagogue or an herb that helps increase breast milk supply. I however had a hard time finding any other evidence of this thought. So it may or may not help you.

One consideration that could explain this though: Chamomile is awesome at reducing physical stress in the body. And when mom has less stress, her supply goes up.

Honestly, if you’re trying to increase milk supply, there are better things to try to do (like skin to skin and other herbs.)

The good news, I found no evidence that it decreases milk supply!

If you are looking for an herbal tea that will increae your milk supply, I suggest checking out our Mothers Milk Tea Review.

How to Pick a Good Quality Chamomile Tea

One of the most important things when picking your chamomile tea, is whether or not it’s organic.

Herbal teas are notorious for containing lots of yucky pesticides, so it’s one the things you should always buy organic.

My favorite pre-bagged chamomile tea bags are these ones from traditional medicinals.

They also have a version with lavender which is fabulous and nursing safe as well! The lavender adds a nice light flavor.

The boxes of tea are a bit pricey, and the best price I’ve found has been Amazon when you buy a 6 pack (which means 96 tea bags altogether.)

But if you know you’re not going to drink that much the single packs are comparable to typical grocery store costs, and this brand is found in most grocery stores. (In our area it’s about 6 bucks a box.)

I love loose leaf chamomile. There’s something so cheery about those bright yellow flower heads that feels so good to steep and drink up.

It’s also the best way to get the most bang for your herbal buck. This means you can get organic chamomile for a pretty low cost per oz usually.

For example, you can get a 1lb bag of organic chamomile tea for a great price. Plus, it’ll last you forever! (The tea is great for an herbal baby bath as well!)

If your worried your baby may have an allergy, you can try a skin patch test. Basically, rub a bit of tea on their skin and wait a few hours.

If no redness or irritation shows up, your baby is probably not allergic.

Another safety precaution I’d like to just throw out there… Do not spill hot tea on baby.

After all, those little limbs flail so suddenly sometimes. And sleep deprivation can make us clumsy at times, or maybe its just me? 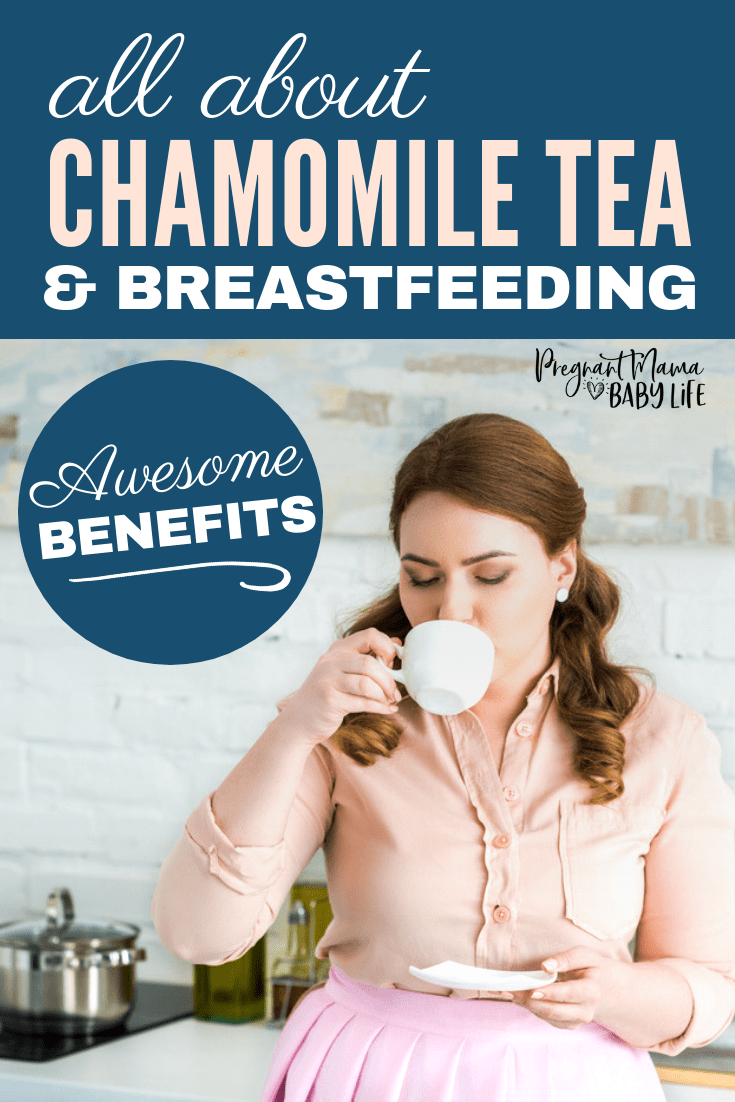 Disclaimer: Most herbal treatments have not been thoroughly researched, particularly in regard to breastfeeding safety. Herbs can considered drugs, and some caution is necessary. I am presenting this data as is, without any warranty of any kind, express or implied, and are not liable for its accuracy or for any loss or damage caused by a user’s reliance on this information.

Previous Post: « Using Witch Hazel Pads Postpartum: How to Do It Right!
Next Post: 20 Unique & Fun Space Baby Names That Are Out of This World »